History of the NDC

Nahant was the scene of some of the earliest organized yacht racing in North America. On July 19, 1845, the first formal yacht race in the Boston area was held off its shores. The event was open to yachts of between 10 and 50 tons, and the 22-mile course around the Graves and Egg Rock drew 11 contestants. Benjamin Clark of Nahant won the race in his 12-ton (roughly 45 ft.) schooner "Raven", beating several larger boats, on handicap. We learn from the "Annals of Nahant" that the less successful contestants questioned the handicapping, thus initiating a lively tradition that continues to our day!

Nahant figured in yachting annals throughout the 19th century with exploits such as the voyage in 1866 of the yacht "Alice", from Nahant to Cowes, England. One of the first yachts to cross the Atlantic, the 27-ton "Alice" was a seaworthy craft modeled after the Boston pilot boats and was owned by Nahant summer resident Thomas Appleton, and sailed by Benjamin Clark's son, Arthur. Another member of the summer colony, General Charles Paine, owned three America's Cup defenders, the "Puritan" (1885), "Mayflower" (1886) and "Volunteer" (1887). 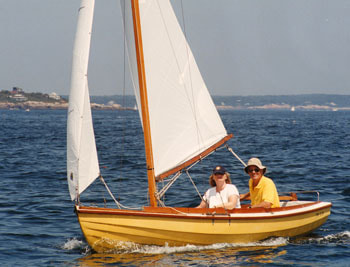 As the focus of large-yacht racing moved to Marblehead and Manchester in the latter part of the century, small-boat racing in fishing dories became more popular with both year-round and summer residents of Nahant. Families whose names figure prominently in early records of dory racing, and who still live in Nahant, include the Goves and the Taylors. This activity led to the founding of the Dory Club in 1894.

The Nahant racing dory design adopted around 1906 was heavier than the popular Swampscott dory developed between 1870 and 1890. The boats were flat-bottomed centerboarders, internally ballasted in heavy weather with 50-pound pigs of lead or iron. They were sloop rigged with a large leg-of-mutton main and a small jib, both unfurled from an unstayed, removable mast.

Racing at the NDC was curtailed during the Spanish-American war of 1898, and was not resumed until 1903. But attention had returned to sailing by 1906, when the simple club house was built (for $1500) on the town wharf to provide storage for gear, and a place to have tea. Regular races were held on Saturday afternoons, July 4th and Labor Day, with special races on Wednesdays for juniors under 16 and "females of any age". Membership became progressively more restricted to Nahant's wealthy summer residents during these years.

Year-round residents were only allowed to participate in occasional "open" races held by this exclusive, albeit spartan, club. Nevertheless, the results record the successes of "Townies" such as Joseph Gosselin, the town barber, who was the able skipper of a fast boat called "Close Shave".

Beginning in 1911, a class of 22-foot gaff sloops, initially called Bug boats, was introduced in Nahant. By 1922, these boats had evolved into one of the larger U.S. fleets of the International Star class, which remained the main racing class at the NDC until World War 11. The Nahant Stars were the only fleet of this class to carry spinnakers. Smaller cat-rigged boats called Monty Cats (built by Montgomery's Boat Yard in Gloucester) were introduced for junior racing in 1929. Monty Cats are still sailed in Annisquam, where they are called "Fish Boats".
​
Nahant Dory Club members were active on the national and international racing scenes _ in the 1920's and 1930's. Frank Paine, son of the General Paine mentioned earlier, was a talented yacht designer and racer who drew the lines of many successful boats, including the famous racing-fishing schooner "Gertrude L. Thebaud". Paine also won the Manhasset Bay Challenge Cup for the R-class in 1928, and designed the J-boat "Yankee" that introduced several innovations (such as the parachute spinnaker) into the America's Cup trials of 1930 and 1934. 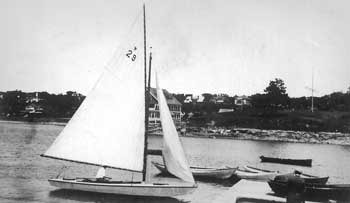 Women were active in the club's sailing and social functions, and "mixed doubles" races were held in the Star Class, in the 1920's. Husband-wife teams such as the Curtis' and the Kings took things seriously enough to ship their Stars to Havana for the mid-winter Bacardi Cup races, a famous event of that time. The families most active in NDC racing throughout those years, and who are still residents of Nahant, include the Motleys, the Sigourneys, the Hodges, and the Warrens.

These halcyon days of the Dory Club's history were brought to an end by the combined effects of social change, the devastating 1938 hurricane, and mainly, WWII. The remains of the once 20-boat Star fleet were sold in 1941 to Lake Sunapee (where some are still racing today), since recreational boating was forbidden in the Boston area waters during the war.

The Town class was first introduced at the NDC in 1939, as a less expensive alternative for those reluctant to replace Stars destroyed in the 1938 storm. This 16-ft dory-type sloop has remained the mainstay of NDC racing to the present day, with a fleet presently numbering over a dozen boats. The 15-ft Mercury-class sloops were also popular in the late 19601s, and the 13-ft Laser class offered spirited competition in the late 1970's and early 19801s, for those inclined to the thrills and spills of planing hulls.

Besides this one-design racing activity at the NDC, a solid contingent of small cruising boats competes for the coveted Chowder Trophies, held three times a year. Further afield, the successes of the NDC fleet over the past ten years include the class victories in the Marblehead-to-Halifax and Marion-to-Bermuda races of Edward Tarlov’s Tartan 41, "Aurora", and the PHRF Boat-of-the-Year awards won by Sarge Goodchild in his C&C 40, "Manxman". Other exploits include Tom McGrath's cruises to Maine in his Townie, and more recently as far as the Florida Keys in his Tanzer 22.

The club has always worked to foster junior sailing and racing in Nahant. The Turnabouts, 10 ft. sloops of plywood construction, were popular junior boats in the 1960's. The program was revived and formalized in the early 1980’s, and six Super Skunk boats were purchased by the Town of Nahant. An associated week-night adult instruction program, and particularly, a ladies’ solo racing program, also continue to prove popular. Over the century since its founding, the NDC has moved full circle from an informal club, through a period as one of the most exclusive sailing clubs in America, and then after WWII back to its original intent simply as a meeting place for amateurs of sailing. What hasn't changed are the goals of promoting a love of boats and the sea through congenial competition, and also the desire to introduce this great pastime to the next generation who will challenge the winds and waves off Nahant's rocky shores.

​This brief summary owes much to previous discussions of NDC history written by Arthur Fay, Dan Perepelitza, and Herb Motley, Jr.
​
I am also grateful to past NDC Commodores Frank Cusack and Herb Motley, Jr., and to Lilly Johnson and Calantha Sears, for helpful assistance and comments during its preparation. Those interested in looking further into the subject will find much original material of interest in the archives of the Nahant Historical Society.

This article was written by Peter Foukal on the occasion of the NDC Centennial, 1994. No part of it is to be reproduced without express permission from the author